Screw Following your dreams–CHASE THEM!

For those of you who know me – I’m a very passionate person.  Be it technology, skills development, fatherhood, Microsoft, mobile devices – whatever.  I tend to be someone who jumps in with both feet.  Sometimes I do it on instinct. Sometimes I do it with after a long hesitation and with great caution.

Well – I jumped in this time – with both feet.

Let me back up a bit for a little bit of context and history.  It has been a dream of mine to work at Microsoft. I happened to be referred into the position of IT Pro Evangelist by a very good friend of mine (Pierre Roman) who was in the process of applying for the job.  During his interview process he decided the role wasn’t for him but said to the HR rep “I know this guy who would be perfect for this job” – that guy was me.  He gave me a call while I was off on paternity leave with my Twin girls. At first I dismissed it, saying “I’d never be good enough” to work at Microsoft – but he insisted I apply. Nine interviews later, I was offered what would become my dream job – working for Microsoft Canada as an IT Pro Evangelist.

Fast forward 7 1/2 years later.  I have “grown in role” up to a Senior Technical Evangelist working on the same team – working with and engaging the Canadian technology community.  I had developed a knack for understanding how to make a difference in the lives of people by enabling them to use (Microsoft) technology more effectively and further their careers in IT. I loved getting up in the morning every day – never hitting the snooze button – giving it my all.

A position opened up on a team in Redmond at Microsoft Headquarters.  It was for one of four Technology Evangelists that have similar responsibilities and functions to what I was currently doing (and some cool new challenges), BUT was on a worldwide stage.  At first I wasn’t really interested, since I have very strong ties to Canada AND it would mean relocating my whole family down to Seattle.  But – after talking it over with my boss (WIFE) on a number of occasions – she said “go for it”. I then talked with my other boss (work) – who was very supportive of the idea.  I’m kind of paraphrasing his comments – but my conversation with him lead me to the title of this post.

If you simply follow your dreams – you will be constantly taking the passive route of going where they meander.  If you really want to realize your dreams – YOU HAVE TO CHASE THEM in order to have a chance of attaining them.

I decided to apply and went after the role whole heartedly.

I write this post sitting here in Seattle, with my family in temporary housing. After a long 4 months during which time we completed the interview process, job offer review , visa application process, relocation planning, selling off of personal property / house / car, actual moving day – we’re ALL onboard in this fantastic new journey.

I am now a Technical Evangelist on the Corp evangelism team here in Redmond at “Corp” (a.k.a. Microsoft Headquarters). I will be focusing my technology expertise back to my roots – CORE INFRASTRUCTURE on the Windows Server platform (current and future versions). When you think about it – “Server” is really the building blocks on which you craft your solution, be it on premise, optimized for private cloud or even public cloud.  Windows Server will be playing a significant role – now and in the future. I’ll be responsible for the technical reviews / advising on content for the major technical conferences Microsoft puts on across the world. I’ll also continue to be engaging the worldwide technical audience and engaging with social media / blogging / podcasting and more. There’s even an element of community building with the internal Microsoft Evangelism efforts with the IT Pro Evangelists around the globe. The role will continue to evolve over time – but once again – I’m Stoked.

On the eve of us departing Canada for the US, I called a friend of mine to talk about the move. He was sad we were heading out, but at the same time he was very excited for me and the family. He said to me “you’re changing your family’s destiny by doing this. That’s exciting – embrace this challenge and relish the moment”.  I hadn’t thought about it in this context before – but it’s true. New job, new house, new schools, new friends, new opportunities – it’s kind of overwhelming at times.

You know what? After starting this journey, I can say that despite my hesitations at first – I can honestly tell you, my Gut is telling me it’s the right thing to do, the right time to do it.

If you have an opportunity and you are on the fence – don’t get paralyzed with how big of a change it would be in your life and your family’s life. Do your level of sanity checks and consult your internal board of directors. 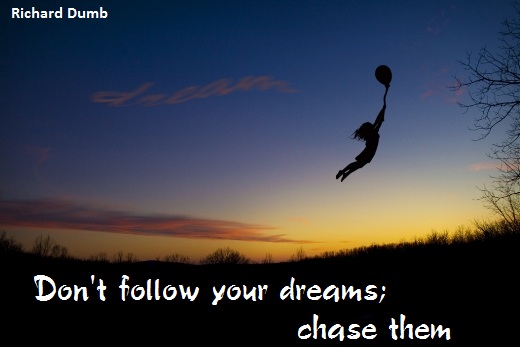 Screw following your dreams, chase them! Once you’re close and you’re ready – Jump In!

About author View all posts

About The Regular IT Guy

Rick Claus engages in person and online with the worldwide Ops community on behalf of Microsoft. As a Cloud Advocate on the Azure engineering team, Rick's role is to connect with technical communities in order to share his knowledge about the ecosystem and capture feedback on how to make things better.

Technical areas of expertise from his 20+ years of experience in the IT Industry include: Core Azure infrastructure services, Windows Server, systems management and all things "cloud" ;-)

Unofficially, Rick is focused on spreading his enthusiasm, passion and excitement on all things technical to anyone who has the time for a coffee (or pint) and a chat (in English or français - naturellement).

Warning: sizeof(): Parameter must be an array or an object that implements Countable in D:\home\site\wwwroot\wp-content\plugins\projectnami-blob-cache\project-nami-blob-cache.php on line 416